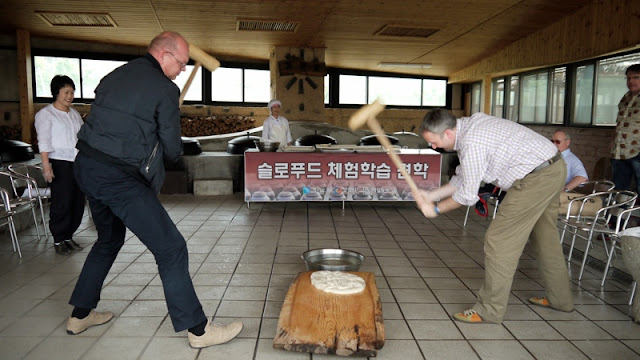 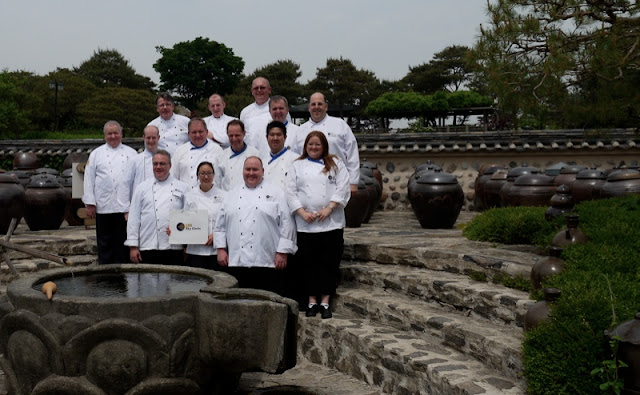 I was asked by KTO to write a few articles on the topic of Korean food for their website, Koreataste.org. Here is my latest on the culinary tour for the LSG Sky Chefs.


I was lucky enough to be invited to the culinary tour for the LSG Sky Chefs. These chefs were to getting a 36 hour crash course on Korean cuisine by attending cooking classes and then travel to a fish market, a kimchi factory, a soy bean farm, and to do a restaurant tour. These chefs manage the food for most of the major Airlines such as: Lufthansa, American Airlines, Delta Air Lines, Asiana Airlines, Swiss International Airlines, United Airlines, Alaska Airlines, Korean Air, and Aeroflot. The company manages about 30% of the worldwide airline catering market.

This is a true boon for Korean food since these chefs handle the meals of millions of people flying around the world. 15 chefs from the company that handle different aspects of Korean food such as menu planning, frozen foods, localization, and production came to Seoul in search of new flavors, and techniques, and finished products for the airlines. Our job was to introduce them to the culture, the products, and the cuisine of Korea in two days. With such a short period of time, the job of O'ngo Food Communications was to give them a crash course on all things Korean. 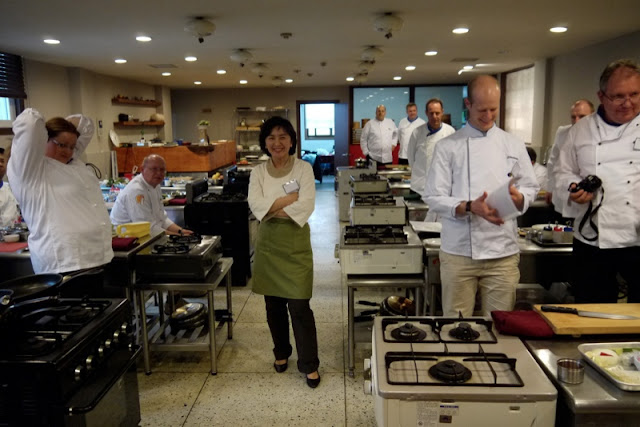 Our culinary experience started at 6pm at the cooking school with cooking classes. First, Chef Jia Choi taught the basics of the sauces and ingredients such as soy sauce, gochukaru, omija, garlic, ginger, etc. They were then split into 2 teams so they would learn to make 14 different dishes. The enthusiastic chefs made Korean favorites such as Bulgogi, Kimchi, Eggplant, Dakgalbi, Jayeok Bokkeum, Japchae, and some unusual dishes as pan roasted burdock and a royal hot pot. The chefs were very skillful in making all of the dishes and then they had a big meal together as a group with bowls of makgeolli and shots of soju. 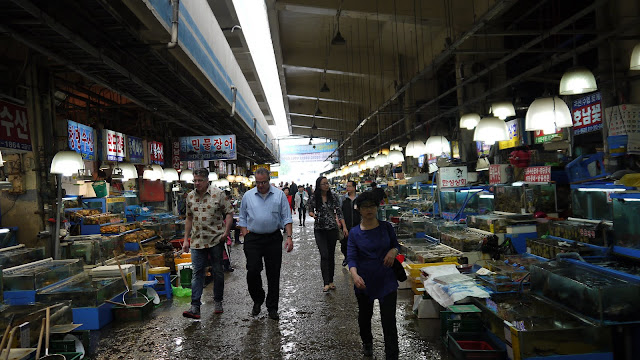 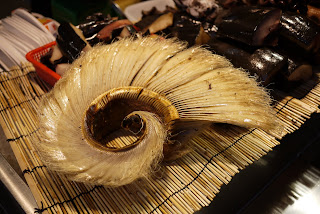 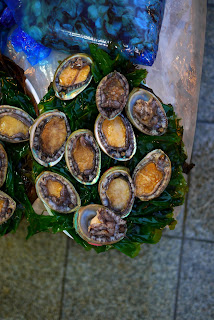 The next morning we headed over to Noryrangjin Seafood Market. We saw some of the more unusual marine life that Koreans like to eat such as sea squirt, sea cucumber, fermented skate, and live octopus. We also had Korean perennial favorites like hwae (raw fish), whole steamed king crab and fish soup. 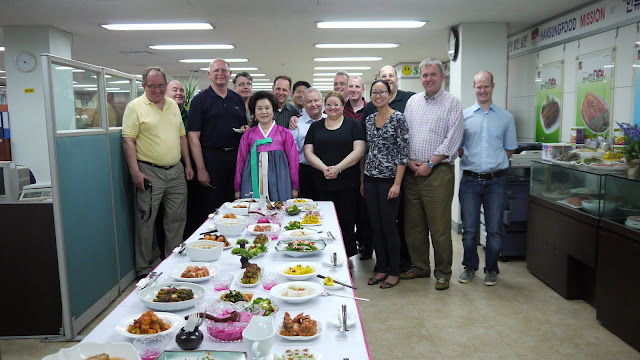 After our meal there, we were whisked off to Hansung Kimchi factory to see a tour of their kimchi processing operation.  Here we got to meet the CEO of the company Soon-ja Kim. She explained the philosophy of the company. We then did a tour of the factory to see the kimchi made, followed by a tasting of over 30 different types of kimchi. The chefs were especially impressed with the broccoli and cucumber kimchi's. The topic of putting these dishes on the airlines came up more than once. Keeping with our time schedule, we then rushed off to Seoil Farms to see the artisan process of making jangs (Korean mother sauces) and tofu. The farm, located in Anseong- outside of the city, is picturesque- full of greenery, bright flowers, and countless rows of the Korean icon: the O'nggi. These o'nngi's are crafted from slate pottery and glazed brown. The rounded shape aids in the fermentation of the soy sauces, bean pastes, and red chili pastes that Seoil Farms is famous for. We then took part in a tofu making demonstration. We watched fresh, organic soybeans get stone ground. The bean juice was then coagulated with sea water from 40 feet deep- the teacher told us that this is the best way to coagulate the bean into plush tofu. 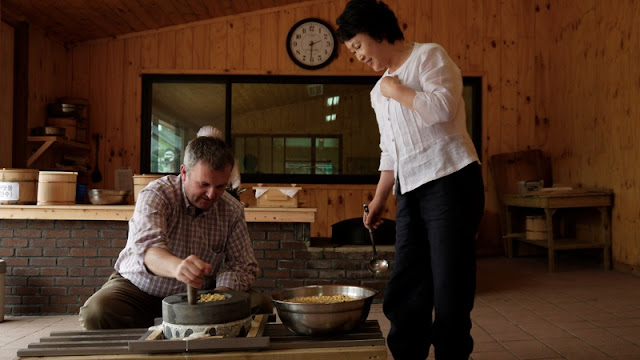 The taste of this fresh tofu was exquisite- soft like fresh creamed cheese with a hint of the sea. 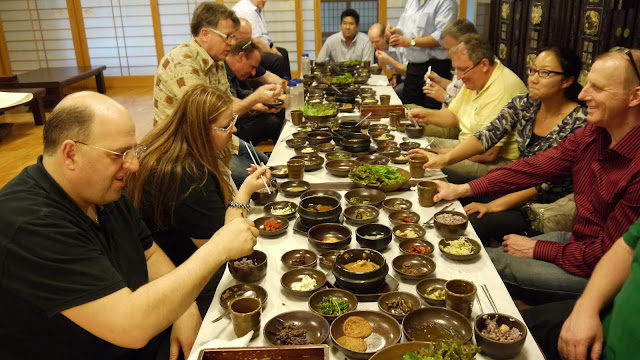 We couldn't leave without having lunch, so we enjoyed a sampling of some of the best dishes that Seoil Farms had to offer at the restaurant. We had lotus root, garlic stems, bracken, kimchi, beans, fresh greens, rice, and a special bean stew called cheonggukjang. Cheonggukjang stew is often jokingly referred to as "stinky bean" stew- it did have a certain pungent odor here as well. The taste was rich and compelling much like a finely aged, cheese. It was delicious.

With the day done it was time to relax, so the chefs decided to end the day with some drinks. First stop was a cloudy rice wine restaurant famous for their green makgeolli (it had some mulberry leave powder mixed in). This was followed by more drinks at a ribs place and finally a trip to Kwangjang Market for crisp bindaetteok.

These chefs ate most of what Seoul had to offer in 36 hours. Hopefully, they will take what they learned and experience and add it to the menu's on the different airlines around the world.

So was this tour a success? I asked one of the participants, Fritz Gross, Director of Culinary Excellence Asia Pacific, which foods he thinks would work on the airlines. He said, "Bibimbap is great for foreign tastes because it has lots of vegetables and nicely marinated meat the gochujang is not too spicy." When I asked him if there were other dishes, he thought would work he said,"Korean stews would work well and so would bulgogi because it has a nice sauce and vegetables in it to keep the meat moist. I think that it's a dish many people would like as well."

When I asked Willi Woidera, Director of Product Development for FRA ZE- specializing in frozen foods, what he thought of the culinary experience, he answered, "It was a great experience because we got to see a lot, make a lot of different foods and ate a lot of different types of food. I think the Korean food and techniques can be incorporated into different cuisines and I definitely want to add these ideas into our menus. In the Kimchi factory, I learned about many new ideas- I especially enjoyed the new techniques for veggies. I can't wait to incorporate them into what we do."

Of course, I had to ask Alfred Rigler, the head of the LSG Sky Chefs why he chose Korea to do this Culinary Excellence Program.

"There were several reasons. First of all, we have a very large operation here in Korea. We work with many of the major airlines here. Second, we do a lot of business with Korean clientele and they have specific needs and tastes. But most importantly, we wanted our chefs to get a first hand experience in the Korean kitchen to learn the kitchen style and techniques. Korean cuisine is very different from Italian or French or any other cuisine. We need our chefs to be educated on this so they can share this information with other chefs in our network."

This was a wonderfully, educational culinary experience. I think that this group of chefs will be able to share this experience with the countless other chefs in the company and spread Korean cuisine through the air.