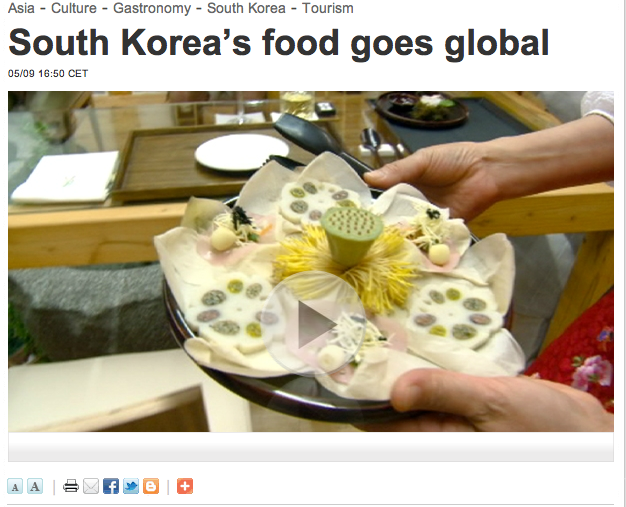 Last month when reporter Anne Devineaux came to Seoul and asked for advice on Korean food I was ecstatic to help. I made a few recommendations (but not all of them) and I think she did a great job on her report on the state of Korean food. Here is the story. You can see the video report on their website (link below). I was especially happy since she wanted to interview my good friend and business partner, Jia Choi.

The South Koreans are keen for the world to develop a taste for their country, and they’re using food to do it. Now there are culinary tours for overseas visitors in Seoul.
It is designed to shine the spotlight on South Korean cuisine, which to many western eyes is something of a mystery compared to that in neighbouring Japan or China.
Jia Choi is a Korean food expert who organises them.

“In western culture, you have appetizers, and then main and then dessert,” she explained, “but in Korea, we just serve all everything in one table, and you design your meal. So when people come to visit Korea for the first time, they don’t know how to eat. Sometime they just put all the vegetables on their rice and then mix it, so the culture itself is very different”.

More and more western tourists are discovering how dynamic the capital Seoul can be and food plays a key role in the image of of a country.
South Korea is taking steps to encourage a new type of cuisine more easily accessible to foreign visitors.

It is a mix where East meets West.

In the capital’s fish-market, one of the country’s rising exponents of this new Korean gastronomy explains the trick — combining traditional recipes with western methods.

Hyun Jin Kang, the Head Chef at Jung Sik Dang restaurant said: “Traditionally for example, we would braise eels, but me, I cook it in a pan or in the oven.” At Kang’s restaurant out go the chopsticks and in come the knives and forks. And on the plate, fried eel in a garlic sauce with ginger and red fruit. It is haute cuisine aimed as much at Koreans as foreigners.

The chef went on: “Korean cuisine is maybe difficult for foreigners to get their heads around. We try to adapt the tastes and cooking methods for western palates. In the middle of the country we respect Korean cuisine, but for it to become better known abroad it has to evolve.”

Read the rest here with the video on the Euronews site: http://www.euronews.net/2011/09/05/south-korea-s-food-goes-global/


Young South Korean chefs are increasingly finishing their training overseas. After several years in the United States and Dubai, Edward Kwon went home to Seoul and became a celebrity. He said before fusing culinary styles, you have to
overcome the language barrier.

“For someone who really wants to go outside the country there is a problem of communication. So I think that now our government realises that, and (is trying) to train more people to (in) English other country’s languages, such as French or Chinese or Japanese. And now young generations actually are learning so fast. So I believe after four or five years, lots of Korean chefs will go outside the country to make some different types of restaurants”

Seoul does not only want to export its haute cuisine. There is a new Korean version of a fast-food chain — a concept they hope to develop the world over. Bibigo is a new type of fast-food can already be found outside Seoul, in Los Angeles and Singapore, and soon managers hope in Europe. On the menu, traditional Korean dishes like Bibimbap and side order that have beenb re-named “tapas”.

If they are to succeed in promoting the country through food, the pioneering chefs have to overcome the challenge of introducing the country’s cuisine to the world, without losing too much of the original taste of South Korea.

Pictures are taken either with my Panasonic DMC-G2 Camera with 20mm Lens or with my iPhone 4G
Join the Seoul Eats Facebook Group Page to keep to date with the latest events.
french Korean korean chefs korean food globalization press