Showing posts from July, 2012
Show all

How I am Surviving the Hot Summer

When it starts getting this hot, I don't eat as much. The heat saps my appetite and I just want to wander. I wander through museums and woods in search of cool. I actually like the heat even though I am not a fan of tans. I tend to get sleepier and lazier and get a tad lackadaisical. I don't there is anything wrong with that, I mean I don't drive a forklift nor am I responsible for lives. The food I do eat in summer tend to be small like ice cream. I also love chilled watermelon. When my hunger gets very strong, I like soups like chicken and ginseng soup. Sure it might sound odd, but dang is it good. Have a lazy summer y'all. Dan
Read More, See More >>

Ok, I am getting the summer time lulls and right now I want to do something a bit more fun. Here are some memes that I have made up for something I call Korean Drama Wisdom. You can follow it on my tumblr page:  http://koreandramawisdom.tumblr.com/ I post them if I see something funny while watching dramas. Ok, get on with your lives. Share if you'd like. By-the-way, I am taking a vacation for a couple of days. I need to recharge the batteries. Food posts will be forthcoming soon. I am looking for an editor to help me get some of the posts out faster. If you are interested, let me know. Payment will be in good food and experience. Dan
Read More, See More >>

July 19, 2012
Pros: Super reasonable prices, tasty tacos, and weekly specials. Easy transition from dinner to drinks night. (Well, it is Korea.) Cons: Cave-like decor harkens to its (probable) past as a hof and doesn’t lend much to style or theme. Seoulites might be wary of non-Korean food made outside the trendy capital, but its little brother to the west is proving itself just as ready to be food-forward. For expats and locals alike, Incheon’s Taco Cielo may as well be heaven sent. Situated in the Arts Center area of Guwol-dong, Taco Cielo opened fittingly on May 5th with a menu serving general Mexican food. Taking the elevator up and stepping into the dimly-lit restaurant, I took a breath of relief. It was nice not to see sombreros and other kitschy knick-knacks that seem to plague Mexican-themed restaurants in Korea (and worldwide, for that matter). However, black dominates the scene and some of the booths are located under isolating, cave-like arches. The place is obviously the former home of a
Read More, See More >>

On the first day of Sambok, which marks the three hottest days of summer, I visited my mother's house in the country. On the hottest days in Korea, Koreans eat food that is nutritious and reinvigorating. Food that is able to fight the fatigue from the summer heat and to restart the taste for food (when it is very hot, some people don't feel like eating which could be bad for health). My mother made dakbaeksuk which is a boiled whole chicken with Ma, Ginseng, and other herbs. My mother also was kind enough to give me the chicken leg (it's considered the most flavorful part of the chicken). Because the food isn't heavily spiced. it has some whole cloves of garlic in it, most people will flavor it by adding some salt and some green onions. With this meal we had some wonderful Daechu (Korean dates) Makgeolli. Afterwards, we went for a walk in the country. It was totally muggy, but I loved the fresh air. You should all visit the city of Boeun soon. Dan
Read More, See More >>

Do you know Hotteok? Here is a Video all about it.

I didn't realize that it has almost 100,000 views! Maybe I should make some more videos. Dan
Read More, See More >> 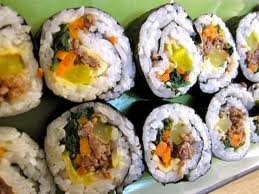 Hi readers, I am compiling a list of possible Korean streets to feature in a food show that will be filmed in Korea this year. This is my preliminary list and because I am on a deadline, I would like to ask you if you have any others that you would like to nominate or a particular stall north of the river (it's for logistics reasons). The show focuses on street food and we are looking for people that have a particular story. Maybe they are the best tteokbokki maker or maybe they were once a gangster or maybe they are an opera singer or maybe they are the best street food cart chef in Seoul. Please let me know and I will try to feature them on the show. The show, Street Food Around the World, will be featured on National Geographic and the Travel Channel. It is the second season for this show. I am helping them with their production in Seoul. Dan *Pictures. I apologize if I am using some of the pictures without asking first, but I need an image to show the readers what the foods are
Read More, See More >>
More posts