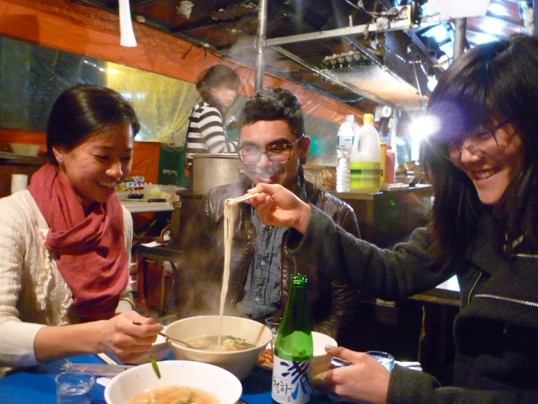 When Washington Post Reporter Michael Alison Chandler came to Seoul, I was lucky enough to help her with her story on the night dining culture. Through the course of several nights, her friends and I went exploring the streets and alleyways for the best eats in Seoul. Her story encapsulates the dining culture.
Michael, thank you so much for your wonderful story.
Here is an excerpt: Go here to read the rest
Korean dishes, like superheroes, are traditionally granted special powers. Kam ja tang, a potato and pork-rib stew, is a hangover cure. Chicken feet will improve your complexion — just ask any teenage girl. And grilled eel or chicken soup with rice and ginseng are among the many dishes that servers will earnestly tell you are “good for stamina.” After a five-month stay in Seoul, I’ve decided that the last quality is not simply innuendo but a key survival skill if you live and work in this tireless metropolis, where even dinner can be an eight-hour marathon.


Koreans favor an il-cha, i-cha, sam-cha — first round, second round, third round — approach to dining their way through the night in a series of bars and restaurants. These long-winded, high-calorie tours can amount to a bleary-eyed extension of workday stress, as business deals are often made during the unsteady third round, and no one can go home until the boss is too tired or too drunk to continue. But for the foreign visitor, the nighttime circuit can be a head-first dive into Korean cuisine and a chance to bond with some new travel companions.

“With every stop, you become closer friends,” says Daniel Gray, the author of the popular Seoul Eats blog, who organizes a multi-destination night-life excursion for tourists.
Here is an excerpt: Go here to read the rest


I enjoyed my share of lingering nights out, and as my stay neared its end, I gathered a group of friends for a final spree through some of my favorite neighborhoods and foods.


We started in Hong-dae, the arts district surrounding Hongik University, which is one of the city’s best destinations for live music, dance clubs and Korean barbecue. After making our way through crowds of 20-somethings, past tarot card readers and vintage clothing stalls, we found refuge at a cavernous restaurant called Sexy Pig and Intestines. A cartoon pig in an evening gown advertised the fare, with “intestines” spelled out in Korean letters.


Our group of mostly expats opted for the classic samgyeopsal, thick slices of pork belly, which we grilled on both ends of our table over red hot charcoal. Kimchi, Korea’s famous spicy pickled cabbage, cut the grease, as did soju, or Korean vodka, which is often poured liberally with meat.


We used tongs or metal chopsticks to turn the sizzling pork. The waiter brought out plates full of spicy green peppers, onions and mushrooms to load onto the grill or eat raw. When the meat was dark and crisp around the edges, we wrapped the tender chunks in red lettuce or sesame leaves and ate them with a dollop of soybean paste.


Happy with our first course, we hailed cabs to our next destination, Insadong, the heart of Old Seoul, a neighborhood of tea houses and ceramics shops. There we met up with Gray, who led us to his favorite makkoli haunt. For centuries a favorite cheap drink for farmers, the milky rice wine is infused today with green tea or taro root and sold in the trendiest urban bars.


We ordered makkoli with sook-karu or mugwort powder (sometimes more lyrically translated as “Korean sage”). I was skeptical as Gray poured the greenish drink into our bowls, but the taste was mild and sweet.


Pajeon, a pancake made with eggs, seafood and spring onions, is a favorite complement to makkoli. Here the specialty was bindaetteok, a similar dish made with mung beans. It was a crowd pleaser. We tore off hot, crisp pieces with our chopsticks and dipped them in soy sauce. We also snacked on warm wedges of tofu served with kimchi while comparing notes on how Korean food has been embraced — or bastardized — in our home countries. (Distressed silence followed mention of Rachael Ray’s kimchi version of sauerkraut and crushed red pepper.)


Sam-cha. A few blocks away we found a pochamacha, or tent restaurant. These glorified food stalls are a popular last stop, serving up greasy eggs or spicy snacks meant to jolt you awake in the wee hours, such as cold oysters smothered in green and red chilies or crisp chicken feet drenched in hot sauce and served with a plastic glove to keep your hand clean.


The tent bars, usually an unmistakable traffic-cone orange, epitomize a no-frills style that I’ve come to love about so many Korean restaurants, even the four-walls-and-a-door variety.
To be fair, I should say that there are many beautiful, quiet places where you slip off your shoes and sit on silk pillows and feast on delicate rice cakes with pumpkin seeds or spiced beef served on pine needles. But the average restaurant that you pass 1,000 times on your way to the subway is hastily set up, fluorescent-lit and full of formica.


In these places, you sip water from a tin cup, fire up your own stew on a portable propane stove and leave with chili paste under your fingernails and the smell of smoke and cooking oil in your hair.
At the tent restaurant we wandered into, toilet paper rolls serving as napkin dispensers hung from the ceiling, and heavy water jugs kept the flaps pinned down. We sampled a drink called cheongha, which looks like soju but tastes like sake, and devoured a rolled omelette drizzled with ketchup, and bowls of udong noodles with seaweed and fish cake. The chicken gizzards sauteed with green pepper and onions grew cold on the table.


Sa-cha and o-cha, our fourth and fifth stops, blended together in a quest for non-Korean beer, which, in sum, is not so good. We stopped briefly at a new microbrew pub near Itaewon, an international neighborhood near the U.S. military base, then settled on a place with a pool table that we found across a pedestrian bridge and around the corner. In a green-cushioned booth next to a steamed window framed by Christmas lights, fatigue set in.


We called it a night around 4 a.m., two full hours before crowds of revelers would be shivering on subway platforms waiting for the first train home. At that traffic-unencumbered hour, my taxi zoomed past endless neon signs and an all-night wholesale market. At home, I lowered my shades against the blinking lights and finally closed my eyes.
Come take a cooking class or take a Culinary Tour in Seoul! http://www.ongofood.com

Pictures are taken either with my Panasonic DMC-G2 Camera with 20mm Lens or with my iPhone 4G
Join the Seoul Eats Facebook Group Page to keep to date with the latest events.
friends korean night dining tour press