Showing posts from April, 2012
Show all

It was a rare day off for me an I met a bunch of old friends and ate a lot of food. It is 11am and I am a bit drunk so it was a good day. All the places I ate at today were in the Haebangchon and Itaewon area. Good food and good company. Standouts today were the sausages and chicken curry pie at Braai Republic and the Corona Margarita at Vatos Tacos. I also had a burger from Thunder Burger and a sandwich from Baker's Table. All was quite good and it means I need to work extra hard at the gym tomorrow. Dan
Read More, See More >>

It is a rare Sunday off for me and I was out to brunch when I ran into my friend Jason who helps run Magpie Brewery. It is a beer making school/tasting room/ standing beer shop that is for serious beer drinkers. They make the creative ales that pushes the envelope of what beer can be. Right now I am sitting and sipping on some habernero chipotle chocolate stout. Yeah you heard me and it tastes like a kissing a beautiful girl at a bbq festival in Mexico. The creative beers are not for sale. They are just "experiments." They have other craft brews on tap for those that would like to indulge. This is not a bar. It is a creative space for people to get together. It's an underground slice of hipster heaven. Www.magpiebrewing.com
Read More, See More >>

A Week of Eats

It's been a great week for food which has been wrecking havoc on my waistline. Food tours have been going very well and I have been so many exciting foodies in the last few weeks. Besides the regular tours that we do, I have been able to do some private food tours for serious gourmets. Some of the places pictured are Seokparang, Baker's Table, Proust, Gold House, Sandang, and Woori Nara. Here are some pictures of places that I have been:
Read More, See More >>

I think if I was in the states, this is what I would have loved to have done: start up a food truck. It just sounds like an adventure: cruising the streets, stopping and cooking some good food, meeting good people and then driving off to the next spot. In my past life, I worked in the restaurant industry and I really enjoyed it. Another person that I have had an opportunity to meet while working at O'ngo Food Communications is Whit Altizer. He came and took several cooking classes at our school with Chef Hyejin. He then went back to Chattanooga, Tennessee to open up a taco truck called Taco Sherpa. As you can see from the pictures of the truck, it looks awesome. The food looks awesome as well. I really like the idea that he is adding tofu bulgogi for vegans. It makes sense and I think I would enjoy eating it as well. The design of the truck, website, logos, shirts: everything looks very polished as well. I think that this is a concept that will take off and soon (hopefully) there w
Read More, See More >>

I was going through some pictures on my computer and it is pleasant reminiscing about my early days in Seoul. In 2006, I moved to Seoul from Gyeong ju and I was an English teacher at an elementary school and later a teacher at a writing academy. Although I enjoyed teaching immensely, I was always drawn to food. At my home, I would host dinner parties and later I started to blog about food. I had no idea then that it would lead me into a career in food. There are still many things I want to do and I there are big things, I would like to do. Here are some pictures from my early "foodie" days. I would like to thank all my friends along the day and I would like to make a toast to a delicious future. Happy Eating, Dan [gallery link="file" columns="2" orderby="rand"]
Read More, See More >> 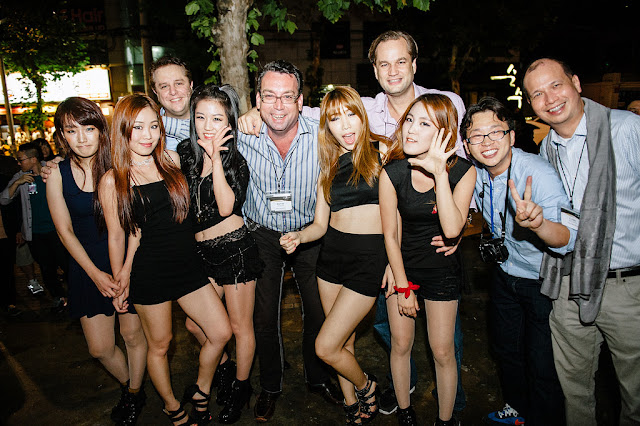 As a young Korean-American college student I came to Korea in heated anticipation because I knew I could go out and party. Overseas, I had heard that the party culture in Korea was awesome.  This is the Korean-(or enter which ever country you were born in here) dream to come party in a night life that is crazy.  And for non-Koreans that have heard of the rumored "booking" culture this sounded like a really good idea.  I have been clubbing here since 1997.  Can you say Julianna's, Boss, Nyla, Ellui, Answer, NB, Circle, etc. These were (and some still are) the top clubs in Korea. Clubbing days in Seoul are somewhat limited to Friday, Saturday and to some extent Sunday.  This idea definitely works with the work hard, play hard mentality that many Koreans have. Though I prefer lounges and karaokes now. I still party sometime and if you randomly scream "Sake" at a club, you might run into me.   You should totally try it, I would totally buy you a drink. But
Read More, See More >>

Test and solution for Wordpress for ios (iPhone) problem

This is a test for Wordpress for ios please ignore. After much tweaking and searching forums for why the Wordpress for iOS app was not working, I finally figured it out. Some of the different apps I had installed were causing errors. Once I deactivated Wordpress Mobile, the app started working again. For those that are having similar problems like me, it might be a recent plugin you activated on wordpress. Deactivate it and see what happens. Dan
Read More, See More >>

Spring is here and I was out to explore the Yeouiddo area yesterday with some guests. It is a beautiful park and I love the walking bridge there. I highly recommend you go check it out while the blossoms are still in bloom.
Read More, See More >>

I revisited Jungsikdang today with an out of town guest. Overall everything was delicious and they even tested a few new items on us such as a tomato salad and a 6 hour braised octopus. The highlights of the meal were the sous vide chicken that was wrapped in its own crispy skin, the bibimbap, the pork belly with bleu cheese foam, and the chocolate chestnut mousse in the shape of an O'nngi. Now I have been to this place several times so you can read other reviews and see other menu items here:  http://www.seouleats.com/?s=jungsikdang 649-7 SINSADONG GANGNAMGU SEOUL +82 2 517 4654 Dan View Seoul Eats Favorites Map in a larger map
Read More, See More >>

HELP ME! Campaign to change Tripadvisor's category from Tours to Activities

Oh, Tripadvisor...How I love you and loathe you. For the last year, our cooking school and culinary tour company has been either the number 1 attraction in Seoul or number 1 tour in Seoul. Before since we were a cooking school we could have been in the attractions category. However, starting on April 1st, I noticed that tripadvisor has changed their policy and has now moved all cooking schools to the tours category. I understand why they might not want cooking schools in the attraction category, but the tours category is not a good place for them either. I suggest that they rename the tours category to "Activities" or "Activities/ Tours." Most travelers won't even consider a tour, but they will consider activities. I think that this will help many travelers find things to do. Also, this will help businesses in the tourism industry (like us). The top attractions in Korea currently are: 1. Myeongdong Nanta 2. Seoul Metro 3. The War Memorial of Korea 4. National M
Read More, See More >>

Photoblog: Cherry Blossoms and the 70's are back! (In Korea)