Showing posts from February, 2008
Show all

February 27, 2008
ongoing Weekend Sushi Buffet at Irodori in the Renaissance Seoul Hotel. Irodori chooses only the freshest, high quality seafood. Seven kinds of sashimi and eight kinds of sushi, including flatfish, red snapper, tuna and scallop. Each piece of sushi is made on request. Tepanyaki service is also available. Saturday and Sunday. W55,000 lunch, W60,000 for dinner, and Children under 11 years old will be charged half-price. (tax and service charges are excluded). 2222-8659. March 1 until April 30 Tempting Sweet Fresh Strawberries at The COEX InterContinental Seoul’s Lobby Lounge (1F) will be featuring a “Strawberry Dessert Buffet.” enjoy different kinds of desserts made with only the freshest strawberries. Enjoy a welcome pick-me-up with strawberry treats such as Strawberry Pistachio Frasier, Puff Strawberry Fruit Band, Strawberry Cheesecake, and Strawberry Crumble. From Monday to Sunday 14:30 – 17:30. W25,000. (VAT and service charge will be added). 3430-8603. March 7 Feel the Spring Din
Read More, See More >> 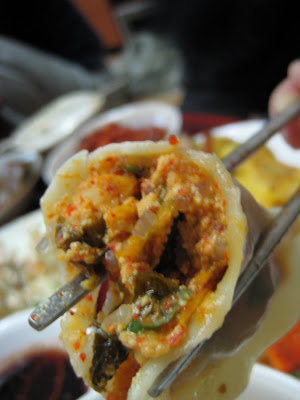 The one good thing about work is that I get homemade Korean food brought to me- courtesy of California Ajumma. California Ajumma is the mother of two of my collegues and she makes the BEST Korean food. Sullah is the Korean New Year and I was able to enjoy at CA's house. Here are the pics of the food. Dan
Read More, See More >> 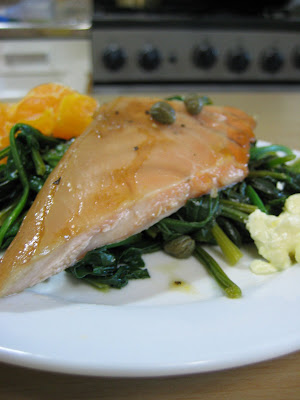 I gots to get my food blog on. Here's some stuff I've been cooking. Actually, I haven't cooked in over a week because of work. But here's some stuff I cooked a week or two ago. First we have Chef Meili's Smoked Salmon which blows that Costco crap out of the water. Then I have my Pear...shoot...back to work. Boss is back. I'll blog soon.
Read More, See More >>

February 15, 2008
This was in February's issue of Eloquence Magazine. Dan Antonio of the restaurant "Antonio" should convert his upscale Italian restaurant to a school for hospitality. Each time that I've had sojourned there, the pleasure has truly been all mine. The service is impeccible and knowledgable, the wine list pleasing, and the menu vast. Each time, I tried to stump the server with an obviously ridiculous question like, "'What kind of toppings are on the porcini pizza?' or 'Which wine would pair well with the lamb?'" a prompt reply followed. And if the waitstaff didn't know the answer, the owner, Antonio, came over personally to attend the table. I was overwhelmed when the owner, who I've heard plays piano at the restaurant if requested, deboned and plated an entire salt crusted sea bass at the table. This restaurant makes you feel like a VIP. And the food doesn't let the service down. Chef Lucca Marchesi offers sophistic
Read More, See More >>

Why I haven't been Blogging.

February 14, 2008
I haven't been blogging because I'm working like mad right now. I'm currently a partner in a start up hagwon. Right now I'm trying to develop curriculum, hire teachers, revise curriculum, learn old lesson plans- basically learn the entire business before we open on March 10. My hagwon teaches nurses the IELTS exam so we can place them in hospitals in the US- where there is a major nurse shortage. Sigh. Back to work. You can check out my business website at www.KSAEnglish.com Dan
Read More, See More >> 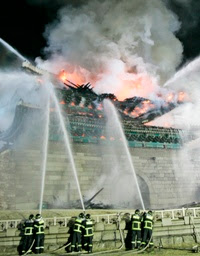 It's so sad, but Namdaemun's gate burned down. This was sent by my friend Jen: Jen: Did you hear about Namdaemun Gate? How awful! :( I concur. Korea's Historic Namdaemun Gate Toppled By Fire Vivian Wai-yin Kwok, HONG KONG - Tourists and South Koreans commiserated when Namdaemun, a 610-year-old landmark in Seoul, toppled, succumbing to an overnight fire early Monday. Seoul’s downtown was covered with heavy smog and a deep sense of gloom on Monday after the roof of Namdaemun, South Korea’s foremost national heritage site, collapsed and the building’s burning wooden pillars tumbled onto the surrounding grassland. "This was a symbolic place where everyone wants to visit when they come to Seoul," Lee Myung-bak, South Korea’s president, said, expressing his sadness when he visited the historic gate. "People's hearts will ache," mourned the newly elected president when officials briefed him on the damage to Namdaemun, the Yonhap news agency reported Monday.
Read More, See More >>

February 06, 2008
Gary is a wine guy from Jersey and he is one of the most entertaining and eccentric wine guys I have ever come across. Watch how he trains Ellen's palate. Dan
Read More, See More >> 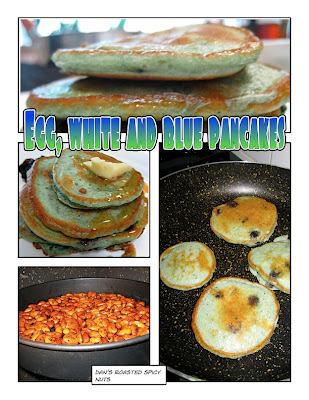 I decided that today that I would make Blueberry Yogurt Pancakes, but I wanted to make them fluffier and even lighter. Now how do you suppose I could do that? The other night Sosun came over and we made Ricotta Cheese Pancakes and in that recipe they separated the egg whites and the egg yolks. They whipped the whites until they were stiff and then slowly folded them into the batter in order to make the pancakes. I tried them today- substituting the yogurt for the ricotta cheese and they turned out wonderfully. They have a very light fluffiness that is palatable. Plus the yogurt keeps the pancakes from being too sweet. I found the best syrup to be a mixture of Denmark plain yogurt and Blueberry Jam. All in all, yummy, yummy. Dan
Read More, See More >> 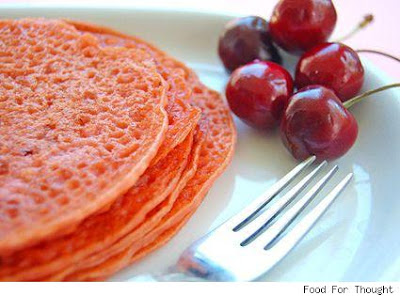 As Marisa pointed out earlier, tomorrow is Shrove Tuesday. Now in my household we have a set rule - that means I am free to shoot my low-carb diet out the window one day of the year without guilt and indulge in a whole lot of pan-fried batter. Sounds heavenly after passing on flour-laden foods for so long. Since I plan to indulge, I thought I would search for something a little extra special, and certainly found it when I came across Ashwini's Food For Thought blog and her recipe for Watermelon Pancakes. This recipe, straight from her Grandma's kitchen in India, was originally posted as a summertime treat, but I think that it would be great to try for Shrove Tuesday or even for a special Valentine's Day breakfast simply due to the gorgeous color. It gets even better though. She also posted a very interesting recipe for "Shaepi Pole" (Sweet Dill Pancakes) which are made out of rice, dill, coconut, cardamom pods, and more. You can find a picture of these after the j
Read More, See More >> 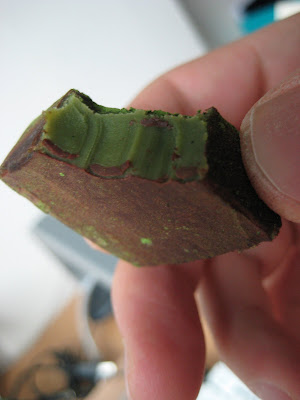 You can see the version with pictures in this month's Eloquence Magazine. Dan The origin of Korean women giving gifts of chocolate to their boyfriends on Valentine’s Day has its roots in Japan. On February 14th, the girls would give gifts of handmade chocolates, (“giri choko,” which translates to “obligatory chocolate”), to their beloved . On March 14, which has been designated “White Day,” the men are to give their girlfriends “sanbai gneshi” or “triple return” of the chocolates given to them on the previous month. Unlike the Japanese, Korean men give gifts of hard candy to their girlfriends on March 14th. Hard Candy! How unjust! Hard candy is not a fair exchange for chocolate. I believe this is why April 14th has been dubbed “Black Day” in Korea, because of all the girls disappointed with their trifle gifts of hard candy. Guys, if you don’t want to wear black and eat jja-ja myeong alone on “Black Day,” I suggest you buy chocolates for your girlfriend. And ladies, do no
Read More, See More >>

February 05, 2008
Doritos Super Bowl Commercial: Giant Mouse Trap Add to My Profile | More Videos First of all, the Superbowl ads this year were lame. I mean the game was actually worth watching. I did like this ad for Doritos. Enjoy^^ Dan
Read More, See More >>

Oysters at the Loft 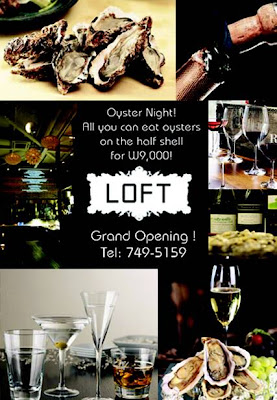 Loft has a spectacular interior and I'm pretty sure the food will match. I suggest that people head over there to check it out. The Loft - Fresh, modern European cuisine served in a refined, comfortable atmosphere with a stunning rooftop terrace. Also offering a diverse selection of Champagne and spectacular Mojitos! All-you-can-eat Oyster Night - Only in February! Ø Date: Every Tuesday in February ( 5th, 12th, 19th, 26th ) Ø 9,000 won for unlimited, fresh Oysters on the Half Shell! Ø Location: Next to the Jaeil Building in Itaewon. 749-5159
Read More, See More >>

Cheeseburger in a Can REVIEWED!!! 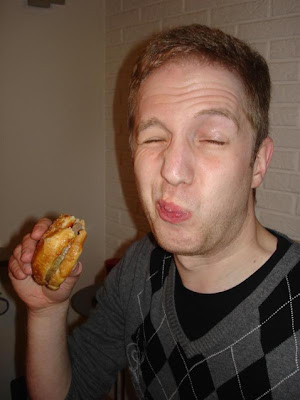 Curiosity is at an all-time high about the Cheeseburger in a Can. Does it taste good? Will I die if I eat it? Thanks to one brave soul who put his life on the line for canned cuisine, we now know the answers to these questions and more. First off, it is fairly expensive at 3.95 EUR (around $6) and it takes about 10 minutes to cook in a "bain-marie" (double boiler). It can also be cooked out of the can or eaten cold (ewww). Head over to Gizmodo for the full story with additional pictures!
Read More, See More >> 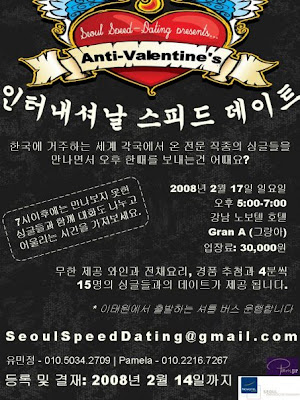 This is from facebook and it was recommended by friend Hannah^^ Seoul Speed-Dating once again presents International Speed-Dating on Sunday, February 17th at 5pm. Registration begins at 4:30pm. NEW VENUE! Gangnam Novotel Hotel (Gran A) There is a shuttle bus available from Itaewon (McDonald's) to the Novotel. Please inquire. KRW 30,000 Wine and food buffet is included. Stay and dance the rest of the evening. Maximum of 70 people (35 men, 35 women) so please sign up early! Email: seoulspeeddating@gmail.com City/Town: Seoul, South Korea Recent News **Registration & Payment Deadline February 14th.** Send registration to seoulspeeddating@gmail.com and payment information will be sent.
Read More, See More >> 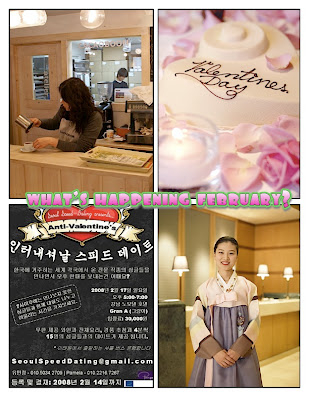 You can also find these events in the newest issue of Eloquence Magazine. February 1 through 10 Lunar New Year Package at JW Marriot Seoul, Gangnam.This comprehensive package includes a one night stay in one of our luxurious Superior Rooms complete with Marriott's new sumptuous, extra-substantial mattresses, a food and beverage certificate for the Marriott Cafe (up to a KRW70,000 value), full access to the Marquis Thermal Spa & Fitness club – Asia's largest indoor fitness center, indoor swimming pool, running track, climbing wall and a full range of thermal baths. Also included is a special late check out available until 2 p.m. February 1st through 10th. 1 night stay, checkout at 2pm. W199,000 per room (VAT and service charge not included, local residents only). 6282-6282. From February 7 Send a Chocolate Letter to Someone You Love from the Grand Kitchen and Deli Bonbons at the Grand InterContinental Seoul. Write a letter on chocolate with your own personalized message. Com
Read More, See More >> 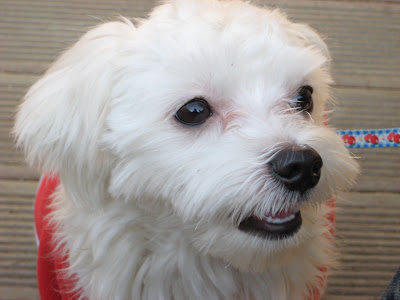 My dog is very cute and I just wanted you all to know that. Dan
Read More, See More >>
More posts